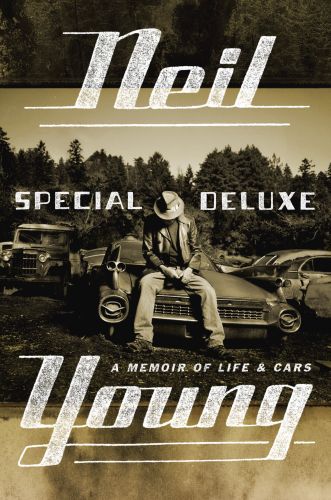 Special Deluxe by Neil Young - the second installment of the iconic musician's memoirs Quirky and wonderfully candid, Neil Young's new book of reminiscences is as compelling as his first book. He returns with more unforgettable stories about his six decades in the music business - but this is not your average rock biography. He centres this new work on one of his life's passions, cars, using the framework of all the cars he's ever owned to construct a narrative of his life and career, exploring and demonstrating how memories are attached to objects. Young also expresses regret for the environmental impact of his past cars, and now passionately advocates the use of clean energy.
Special Deluxe is a mix of memoir and environmental politics by one of the most gifted and influential artists of our time.

The next installment of Neil Young's memoir after Waging Heavy Peace, Special Deluxe is essential reading for his fans and will also appeal to readers of Life by Keith Richards and Chronicles by Bob Dylan.

'Not your average rock-star autobiography .... Young is a natural obsessive and a bit cantankerous, which makes an interesting combination' Richard Williams, Guardian 'Waging Heavy Peace is as charismatically off the wall as Neil Young's records' Janet Maslin, New York Times Neil Young's music and songwriting span forty years, and his 34 studio albums are among the most enduring and popular in modern times. Born and raised in Canada, long resident in California, he has been uniquely inducted twice into the Rock and Roll Hall of Fame. He is also well-known as a political activist, environmentalist and philanthropist, co-founding Farm Aid and The Bridge School for educationally impaired children.